What Do Girls Dig?

“Has data-mining in the humanities emerged as a gentleman’s sport? Two and a half conversations about gender, language, and the ‘Digging into Data Challenge.’”

A two-day conference has been announced, associated with an international funding program, rightly (I think) hailed as transformative for the humanities.

I was excited. I clicked the link. I scrolled down. I did a double take, which means I scrolled up and then down again. Next, I scrolled very slowly, counting.

I almost didn’t tweet this, but then I did: 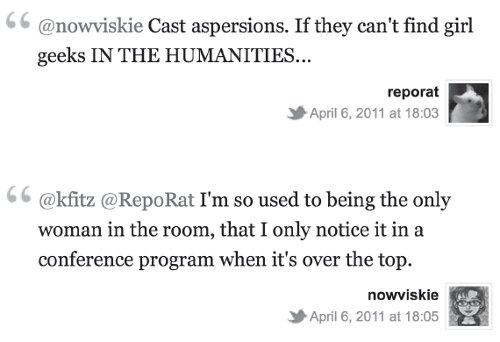 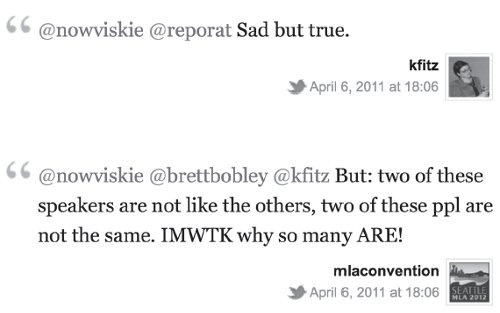 There were some other comments, and retweets, too. I was starting to feel a little sheepish about sparking a negative and public discussion of an issue uncomfortable for many, and about which I often feel ambivalent—but I knew that the group would shortly hear from the Office of Digital Humanities at the National Endowment for the Humanities (NEH), one of several funders of the program. These guys are always plugged in and ever responsive.

If you “welcome suggestions” on Twitter, you will get them. More with the instant feedback: 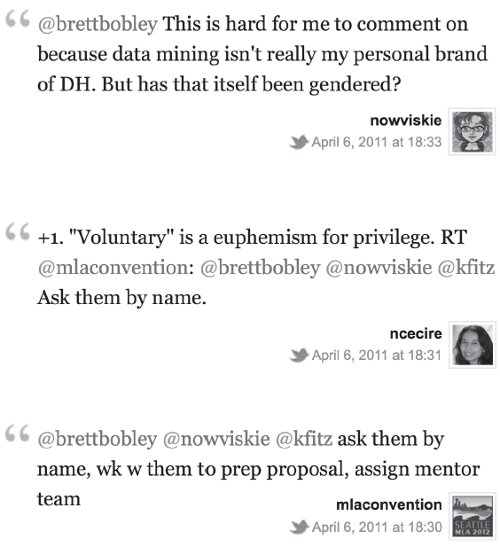 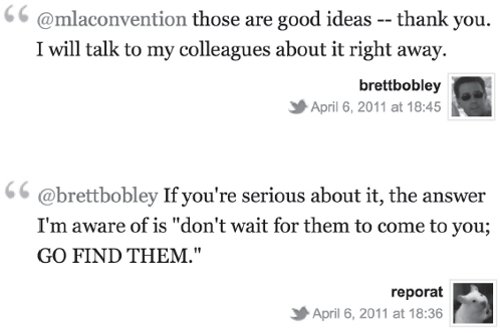 Those were the serious suggestions, taken seriously. (Another NEH staffer picked up the thread on my Facebook page and gave a very sensitive and cogent response, including an appeal for names of particular researchers and communities of practice to reach out to.)

Meanwhile, things on Twitter seemed to get silly. But maybe these questions about the rhetoric of data mining actually get at another side of a serious issue. At the very least, they gesture at a subtler, but equally worthwhile brand of digital humanities outreach: attention to our language.

So …what do girls dig? 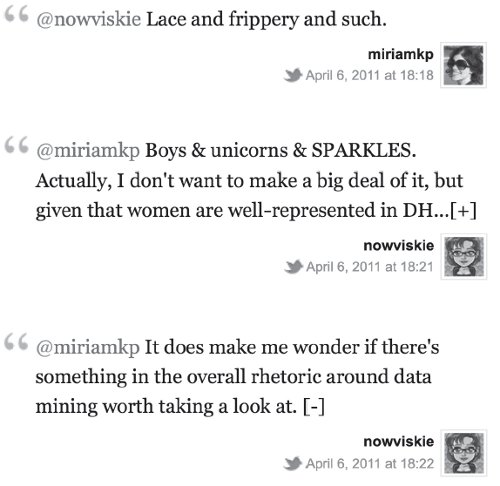 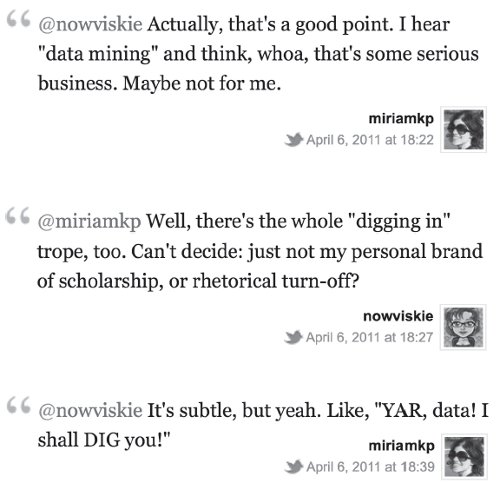 On Facebook—where a colleague pointed out what he called a similar “boys on the podium” gender imbalance in a “future of academic libraries” symposium (“the future is manly!”)—the discussion generated a steady, ridiculous, and slightly dangerous stream of jokes. A manly future for libraries in beer and electric guitars. Flowered gloves and gardening trowels as more appropriate for ladylike digging into data. A duty to lie back and think of England as our data furrows are ploughed.

That last one was mine. And since I started this whole mess, and in a rather flippant way, you may think I’m just full of snark.

In fact, I believe NEH and other “Digging into Data” supporters do a consistently brilliant job of identifying sensitive and qualified peer reviewers and funding worthy projects. NEH’s digital humanities programs, in particular, always strike me as broadly representative of the actual makeup of the field.

I’m sure that gender imbalance in this area has little to do with the Digging into Data grant-making process and more with broader issues, going all the way back (yes, that chestnut) to Science, Technology, Engineering, and Mathematics (STEM) education for girls in the public schools. But mostly, I suspect, all this is about the number of female academics both qualified and inclined to do data-mining work, and who find themselves both at a stage of their careers and possessed of adequate collaborative networks to support their applications for such grants.

Although it wasn’t exactly what I was going for, I respect my pals’ advocacy, highlighted earlier, for funders’ launching of an aggressive campaign to identify and mentor more women applicants for programs like “Digging into Data.” And clearly there’s institutional work to be done on the level of our schools, colleges, and universities. Personally, however, I feel less strongly about both of those things than I do about the need for the entire digital humanities (DH) community to be as thoughtful as possible about the way we describe this kind of work—about the language we use.

I’ve heard three kinds of responses from female colleagues and students about the “Digging into Data” Challenge. One (the rarest) is simple enthusiasm; though it’s interesting that presumably few women applied and none of their projects were compelling enough to fund. Another is trepidation: Is this too hardcore? Involving too much math or statistical analysis I never learned? Do I understand the scholarly possibilities and have the support network I’d need? In other words: this is a challenge. Am I competitive? (in every sense of that word).

The third kind of response (which includes my own) has more to do with framing and rhetoric. I suspect I haven’t gotten super-interested in this kind of work because I’ve heard few descriptions of it that really speak to my own interpretive/hermeneutic/experiential/design-oriented approach to DH. (Though the one that looks at quilts as a source for visual and stylistic analysis is very cool.) And I have a hunch that it’s not just me—that the disconnect from certain brands of digital methods felt by many researchers of my ilk (note that ilk is not gender) has more to do with the language being used for methodological and research-findings descriptions, and the intellectual orientation of the people doing the describing, than with the nature of, say, data mining itself.

It’s easy to make a joke about imperialist and gendered undertones in the “digging in” rhetoric, but to some degree the advertising campaign for this program set the tone, for a broad and new community, of DH’s engagement with data mining. So that’s what I was after, when I raised the issue with an offhand comment or two online.

Improved outreach to particular underrepresented groups is never a bad idea, but I’d prefer to see NEH and its funding partners (and individual DH centers and the Alliance of Digital Humanities Organizations and our publications, etc.) start by becoming more thoughtful about the language we all use to describe and to signal data mining to a very broad community of researchers. After all, digital humanities nerds, we are still the minority in most of our departments, are we not?

A little attention to audience and rhetoric can go a long way toward making applications and results of digital methods seem comprehensible, inspiring, and potentially transformative. Even to scholars who didn’t think digging and delving was their (dainty, fine-china) cup of tea.

And there’s always this option—an idea, I assume, free for the taking:

This chapter was originally published on April 7, 2011, at http://nowviskie.org/2011/what-do-girls-dig/ and http://storify.com/nowviskie/, first as an experiment in using the online Storify system, then in beta release. Storify allows users to annotate and weave together narrative strands from social media. All quotations are from publicly accessible posts to Twitter, a microblogging service through which much real-time conversation on the digital humanities takes place.